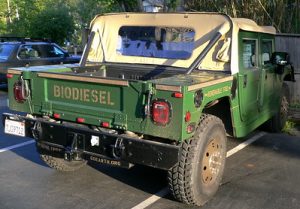 Over the past decade, there has been a significant influx in biofuel consumption. The biofuel industry has taken massive strides to integrate itself within the confines of American culture. From Semi-Trucks to your neighbor’s old 1985 Mercedes Benz 300, the biodiesel world has come into the fray. None have taken a more solid stride with the world of renewable energy than all five branches of the US Military.

Many people have seen the issues facing the fossil-fuel industry for decades now. From the oil embargo’s of the ’70s to the collapse of the oil industry in the ’80s many people had to save money one way or another. The ’90’s presented a small break, and due to this, the massive SUV craze took off. The military took advantage of this and was able to launch the Hummer program for marines on the ground. Then, in the early 2000s, many of the gas-guzzling SUV enthusiasts took a massive hit for their budget. With the instability of the fuel market, nations turned to alternate forms in order to cut down on its gross-domestic war efforts.

Many Nations Searching For Alternative Biofuel

With one of the largest at-home producers of petroleum, the United States wasn’t worrying about the financial burden of using gas-guzzling planes, tanks and literally anything else military. While we weren’t stressing too hard, European nations were looking to more effectively spend their money on more reliable resources. Where most of Europe relied heavily on diesel gas for their automobiles, they would incorporate B20 (20% Biofuel mixed with 80% Diesel). This presented amazing improvements to both their environmental and recycling concerns. This would incorporate with their respective military budgets and spending programs. A decade later, the US would follow suit.

How the Military Utilizes B20

Non-tactical vehicles receive the most love from biofuel. The use of biofuels for truck carriers and many other utilities have shown that the effective rate for biofuels has become significantly larger. With aircraft and reconisance vehicles utilizing more cost-effective and greener strategies, many are wondering when the US military is going to go full bio. Unfortunately, this won’t be the case and might not ever be the case. The performance rating for biodiesel has a substantially lower effective range. Often underperforming the vehicle’s ability by upwards of 10%. These numbers can directly affect the ability of higher performance vehicles like jet fighters and tanks. These poor guys still have to rely on fossil fuels due to the lack of performance from biofuels.

Biofuel Use Outside of Vehicles

Many US military bases rely on the use of the neighboring town’s electrical grid. These electrical grids can often be the targets for enemy attacks. If a grid gets hit with an IED or taken out by any other means, This creates a problem. This creates an issue for not only the base but for the adjacent town or city. With biofuel generators, the military base can remain operational along with medical tents for soldiers and civilians, floodlights, alarms and anything else that a military base will need in order to fully operate. It takes the reliance off of any area that could affect bystanders or the city and puts us on a fully sustainable network.

The conditions for biofuels are great. But the world simply has not been able to create a more effective power output in terms of supplying its military with the best possible energy options. Biofuels typically produce anywhere between 8-10% fewer miles per gallon in a standard diesel engine. This coincides with the nature of the beast: Efficiency. The term efficiency not only comes from how many miles per gallon a vehicle may get but also performance. 8-10% reduction in engine performance has a definite impact on life or death situations or marines face every day. The military isn’t the necessary figurehead for “cheaping out” either. Every inch and every second of planet Earth’s finest engineering needs to be about protecting those who serve.