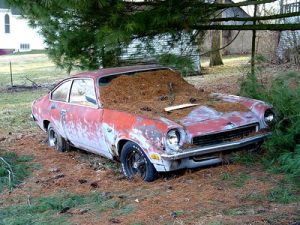 The Chevy Vega is heralded as one of the worst cars to ever grace the market. From its mechanical failures to its awful longevity, the vehicle is nothing short of a disaster.

During the late 60s to early 70s, muscle cars were all the rage. Everyone had to get their hands on the next Chevy Chevelle, Ford Mustang, Pontiac Firebird, or Chevy Camaro. The Vega was meant to take the sporty ride and turn it into a more affordable consumer car.

Then the oil embargo hit. This would help sales in the short run. With the embargo came limited gas consumption for all vehicles. That awesome, new Trans-Am your neighbor has? Well, it took up too much gas and he had to sell it. That super sport Chevelle? Too much of a gas hog.

The Vega was designed as a compact sports car. It…sort of delivered? Sales were awesome during its first run. With over 2-million Vegas sold in the US, this car was hyped to be the next big thing. Unfortunately it had some problems.

Actually, The Car Had A Ton Of Problems.

From mechanical failures in the engine to hoses leaking the Vega was ill-designed. Some may say that it was doomed from the start.

The car was designed to compete in the newly emerging compact car industry. This was a failure as the car was still relatively large by compact standards. The engine had multiple failing parts, and the body would rust jut one year after a New England Winter.

The car proved to be so much of a terrible idea that Chevy was forced to cancel it by 1977.

Some may say this is the worst car ever built, but forget that it was built in competition against the Ford Pinto. Take that as you may.