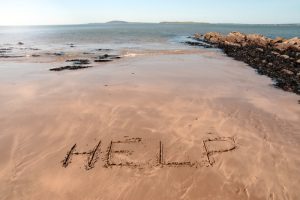 An Oregon woman who accidentally drove her SUV off a 200-foot California cliff detailed how she survived for a week while stranded on a remote beach.

On July 6, when passing through Big Sur, California Angela Hernandez, 23, saw a small animal darting in front of her, which caused her to swerve. The area where Hernandez swerved had no shoulder, California Highway Patrol Public Information Officer Jessica Madueno said, which caused in vehicle plunging off the side of the cliff.

In a Facebook post about the ordeal, Hernandez said that she was blacked out after the crash. After she came to consciousness, her smashed vehicle was filling with water.

“I was still in my car and I could feel the water rising over my knees. My head hurt and when I touched it, I found blood on my hands,” she wrote. “I swam to the shore and fell asleep for an unknown amount of time.”

Injured but able walk, Hernandez said she patrolled the beach — a desolate stretch of rocks and sand covered by fog and nearly invisible to drivers hundreds of feet above — and climbed rocks looking for another person and screamed for help.

Hernandez said on or around the 3rd day (she wasn’t sure), she was stranded on the beach, she began to feel the effects of dehydration. Hernandez found a 10-inch radiator hose to siphon off water from a nearby natural spring, Madueno said.

She said during the day she would climb a rock and call out to far-off cars she could see for help.

“I could see cars driving across the cliff and felt like if I could yell just loud enough, that one could hear or see me. That’s all it would take to make it back to my family,” Hernandez wrote. “Just one person noticing me.”

When days were crossing and she was walking on the beach, avoiding hot rocks, and calling out to cars in the distance for help, her prayers were finally answered.

“I heard a faint cry for help, and I turned and we saw Angela standing in the rocks,” Chelsea said. “She said she woke up that morning and knew it was going to be a good day, and I think I started crying.”

One of them stayed with the woman while the other one ran to get help. When rescue teams arrived, they had to hoist Hernandez up using ropes before airlifting her to the hospital, where doctors discovered she had suffered a brain hemorrhage, fractured ribs, a collapsed lung, broken collar bones and ruptured blood vessels.

Despite the extent of her injuries, Hernandez said is “sitting here in the hospital, laughing with my sister until she makes broken bones hurt.”

“I’ve experienced something so unique and terrifying,” she wrote on her Facebook page, “that I can’t imagine that there isn’t a bigger purpose for me in this life. I don’t know, you guys, life is incredible.”