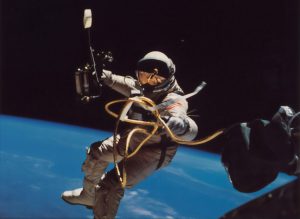 When you’re an astronaut, you may be looking for a heroic means of getting to the moon. But the thing about NASA is that they not only get help getting to the Moon. They also get help reaching the ground floor of their go-ahead. Or have you never heard of a NASA motorhome? The vehicle allows for astronauts to enter a vestibule on wheels and relax in their final minutes to hours, on Earth, before heading high up into space. It’s there that you see astronauts from Apollo onwards drive to the Saturn V in a 1967 Clark Cortez. Otherwise known as the first Astrovan.

The Cortez had it all. A Slant Six engine from Chrysler, a four-speed manual transmission, and front-wheel drive. Even after upgrading to a 4.9-liter Ford 302 engine, the Astrovan was indistinguishably a place of comfort for the astronauts themselves. NASA used the Cortez for over 15 years during the space shuttle age. After a while, the crews on the shuttles would grow too large. Therefore cramping the style of the Cortez. Eventually, NASA changed their choice in Astrovan size to that of the Aistream Excella, complete with a rear-drive GM motorhome chassis.

NASA believes nowadays that a new astrovan is in order. As per the SLS program, NASA gears forward with the return to spaceflight given the Artemis missions. However, to reach the modern-day Orion rockets, it’s a given that the Astronauts will need an Astrovan in order to move forward in their extraterrestrial journeys. It’s still unknown who it is that will make the cut for the new Astrovan. One could say it’s going to be a Mercedes-Benz. Another could say it’ll be a modded-out Rivian. Maybe Tesla wants to wane the competition? Who knows which model it could be? As long as it takes astronauts safely, the point is well made, that you could never treat an astronaut too much like a rockstar.