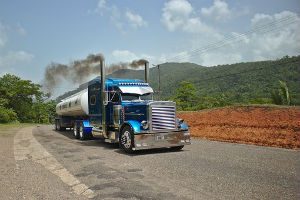 On Friday a law that would phase out diesel trucks in the state of California was proposed. It’s part of a comprehensive effort by state legislators to rein in pollution and temper greenhouse emissions. Nevertheless, it undoubtedly will face fierce resistance from trucking companies and other corporations that depend on transporting products in semi-trucks.

Senator Nancy Skinner’s proposed bill would mandate that the Air Resources Board require a 40 percent cut in diesel emissions by 2030 and by 2050 that would increase to an 80 percent reduction. However, according to the experts, this rapid reduction wouldn’t be feasible without the complete overhaul of the trucking industry.

Currently, heavy and medium-duty buses and trucks comprise 7 percent of the vehicles out on the roads of California. However, these trucks are also pumping out 20 percent of the heat-trapping carbon emissions in our atmosphere.

This data comes courtesy of the Union of Concerned Scientists, a nonprofit science advocacy organization. Furthermore, these size trucks also create 33 percent of the state’s nitrogen oxides, which is the major ingredient in smog.

Currently, heavy and medium-duty buses and trucks comprise 7 percent of the vehicles out on the roads of California. However, these trucks are also pumping out 20 percent of the heat-trapping carbon emissions in our atmosphere.

Senator Skinner made a point to say, “While California is a leader in climate protection, we still have dirty air.” She went on to say that asthma, lung and heart disease and other respiratory issues are on the rise in low-income communities that happen to be located near highways.

Part of the bill also appoints an undetermined amount of money to go to the state’s Greenhouse Gas Reduction Fund. This money would be earmarked for the development of fuels and technology.

The bill is the most recent bit of maneuvering by the state to tackle the greenhouse gas emissions issue. This runs counter to President Trump’s drive to lessen fuel efficiency standards.

Truckers, and others on the front lines of the industry, are generally not on board with this bill. They are staunch defenders of diesel trucks and simply don’t think electric trucks will work.