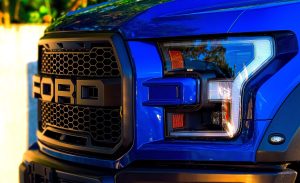 The Tremor is available with some novel features intended to make navigating off-road obstacles much easier, and most of them work quite well. Trail Control, for instance, works as a sort of low-speed cruise control, allowing for even power delivery while heading up an incline or through a rutted pass, for example. Trail Turn Assist provides more maneuverability in tight cornering scenarios by braking an inside wheel, giving the truck a tighter turn radius.

The Tremor’s available Trail One-Pedal Drive feature could use more time in the oven.

However. Like an electric vehicle, the system negates the use of the brake pedal, allowing the driver to simply push down on the gas to go forward and let off to stop. Unlike an EV, though, which uses drag from the electric motor to slow the vehicle, the Tremor’s system uses the truck’s friction brakes. The system is difficult to modulate without practice, and abruptly taking your foot off the accelerator pedal at low speeds can actually lock the brakes. In our experience at Holly Oaks, using the feature on a steep downhill slope caused some unwanted skidding. Luckily, the truck also has a more traditional hill-descent control system.

On the road, the Tremor drives much like a normal F-150. The ride is compliant for a pickup truck and the retuned suspension improves the ride quality somewhat, particularly on sharper impacts, which are more muted in the Tremor than in the standard F-150. The twin-turbo V-6 pulls strong throughout the rev range and helped the Tremor snap off a 5.3-second run to 60 mph at our test track, only 0.1 second behind the 385-pound heavier Raptor’s time. The Tremor also made it through the quarter-mile in 13.9 seconds at 100 mph, 2 mph faster than the Raptor and 1 mph slower than the F150 Hybrid.