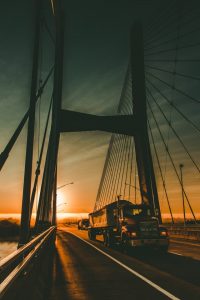 We bet you haven’t seen a big rig handle an I-beam this big before! And if you have, it must have only been in dreams! Heading towards Fife, Washington, this I-beam is going on the I-5.

As you can probably guess with the world’s longest tape measure, the I-beam is two hundred and twenty-feet long and around two hundred thirty one thousand pounds heavy. The Washington State Department of Transportation had to mobilize five girders to support what would be the new 70th Avenue East Bridge.

WSDOT themselves were unphased by the girders, stating that they’re each “the length of a 747-8 jet’s wingspan.”

Before this construction, a past record for the longest I-beam came from a Highway 99 overpass off of Seattle. The I-beam was 205-feet long.

The five girders were brought in overnight from August 28th through August 29th. They were meant to support the strength of the bridge.

If you’re a into large loads, do me a favor and get somebody to call Guinness World Records for their Heavy Haul Of Fame. Secondly, it stands to reason that this one can make your whole face beam, happily, ear-to-ear.

You’re in luck, dear reader! Here is a video of our favorite, available for you to watch. This video clip appeared two weeks ago, at first travel. The following video is a link on Facebook. This is from a trucker who goes by Daryl Patrick.

As for the bridge project in Fife, Washington of the United States of America, the actual construction had closed all lanes between State Route 18 and 54th Avenue East, upon the I-5.

Fuel For Thought: I Spy An I-Beam

Finally, think; the next time you see an I-beam on the back of a truck, ask yourself “how long would it take me to carry that on foot?”