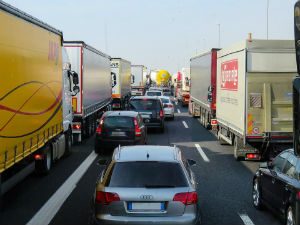 Express lanes will soon be added to the U.S. Highway 101 in order to alleviate the nightmarish traffic congestion between San Francisco and the Peninsula.

The project broke ground last month . It will span 22 miles from I-380 in San Bruno to the edge of Santa Clara County. The project has a budget of $513 million and is expected to be completed in 2022.

Many of the region’s large employers rely on this stretch of highway to get their employees to work. These are tech giants such as Google, Facebook, and Apple.

The new express way will benefit the carpool commuters and tech buses in the region. It will provide free access to a lane designated for vehicles carrying three or more passengers. Other vehicles will eventually be able to access the lane by paying a toll via FastTrack.

Facebook and Google funded the environmental phase. They also contributed $50 Million to the project’s construction budget, according to Foust. Both companies rely heavily on the highway to transport its employees in tech shuttles to and from its Menlo Park and Mountain View headquarters.

The California Gas Tax will account for $200 million of the project’s funding. The controversial tax rose the price of gas in the state by between 34.7 cents and 46.7 cents per gallon.

Officials project the 101 express lanes to be the most heavily used in the area. There is an expected average monthly express lane trips well above 1.2 million, according to a recent SMCTA meeting presentation.