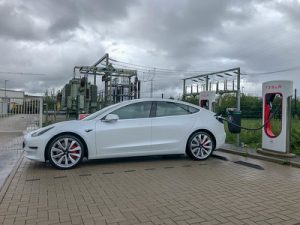 Tesla is the most widely talked about in the automotive company. Its current endeavors are continuing to put in on the fast-track to success.

Last week alone saw a number of advancements for the company. The first being that the company is almost complete with stage-5 self-driving cars. Stage-5 is the end-game for fully autonomous driving. While other major companies have moved their efforts into competing with Tesla on the electric car field, the company is already there, done with it, and ready to move into other territories.

Another mention goes out to the law-suit the company filed with Rivian. Rivian was an electric car start-up that supposedly stole patents and plans from Tesla. Unfortunately, according to Elon Musk “They’re doing a lot of stuff wrong.” It looks like one of the largest competitors to the automotive spearhead might not be what we thought they were.

Auto sales are currently dragging in America due to COVID-19. The company made itself very clear that moving out of California will probably be best for itself. With a new “Gigafactory” being established in Texas, and another one in China, the US auto market might see is a shift in focus from them. China boasts the largest populace in the world. What better place to put your new automobile on the market? Add to that the ability to drive a 1-million mile battery. Make the battery cheaper and an overall drop in price for its vehicles. It’s no wonder we can see the company moving faster and better than the rest.

The future continues for Tesla. Despite global shortcomings for all manufacturers, they seem to be the one coming out on top. While they have taken a drastic hit, the impact isn’t felt as hard as the rest of the industry.

It seems that nothing can stop them now that they are rolling.