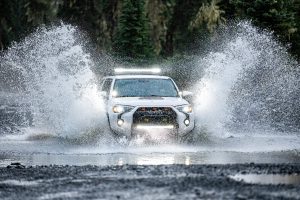 Toyota’s latest 4Runner TRD Pro has some ups and downs that make’s timeless and timed-out all at once, as it turns out. Sure, it kind of looks cool, but the changes that are coming together in the Toyota 4Runner has only shown a couple of changes since 2009. Couple that with the 1GR-FE 4.0-liter V-6 engine, and you’ve got a blast from the past that you’re not even sure should last. The vehicle is certainly stuck with the roll-down rear window combo’d with the 4×4 style.

Toyota can’t help it! This TRD Pro has only had a couple of changes over the years, and for what?

The vehicle has a front skid plate, along with a chunky roof rack as well as a separate grille with old-school Toyota letters. Suspension upgrades have the package covered. But besides that, there’s a Nitto Terra Grappler All-Terrain style to the tires. And an upgraded exhaust shows itself as an annoyance beyond what anyone could even calculate at highway speeds. Think about all the ingredients present and you can see that the manual transfer case with only 9.6 inches of ground clearance with hill-descent control. Toss in the varied settings for all of the terrain and you might not realize that it’s lacking the cool Toyota desperately deserves by now.

The 4Runner has a lot of body roll and brake drive and almost too much play in the steering rack, while displaying the V-6 with an intake roar which has you distance from the transmissions.

Toyota has plenty of other hybrid SUVs that can reach about 30-plus MPG. Toyota has so many 4Runners that they sell. But for how long, and for how much. $144,696? Is that even a good amount for something stuck in the past? It cannot yet be properly there, really.