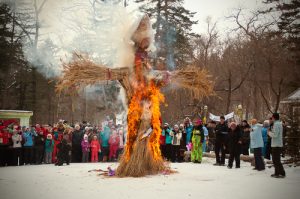 Festivities scheduled from 2 p.m. on October 20 to 2 a.m. the next day, will take place at the Potrero Power-Station.

‘’Art, mutant vehicles, theme camps, inner- and deep-playa, performance, and discovery ’’ are the part of the festivities, much like the actual Burning Man.

Burning Man was originated from San Francisco. It brings 70.000 people annually. Initially, it was a small gathering in San Francisco, more than three decades ago.

Those who attended previous Decompressions in San Francisco see it as a big block party, a little more relaxed than Black Rock experience.

Decompression in San Francisco is basically a one-day event. Let’s agree it’s hard to feel secluded if you can get to Millennium Tower, a phenomenon on its right within 20-minute drive. Some people don’t agree with this urban setting. They think the setting is not in line with the Burning Man spirit. For others, it’s an opportunity to have this microcosm experience they wouldn’t have time to get to in any other way.

Yet there are some similarities between the two events, such as the emphasis on volunteer efforts, art projects, and celebration of self-creation.

Visitors can enjoy all these festivities with plenty of food, drinks and diverse music.

Isn’t it great to have a place and opportunity to express yourself? That’s the main principle for San Francisco’s Burning Man festival.

The Nevada desert will transform into a mix of a practical and fantastical phenomenon.

An art and performance photographer, named Hu, said he naturally tends to gravitate towards any spectacle that inspires emotions, and the Burning Man is the perfect place for that.