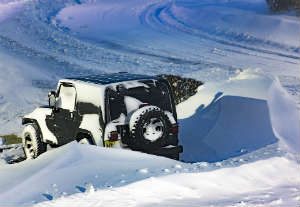 SAN FRANCISCO, CA – After five unfortunate days of being trapped in an unlikely snow-filled California forest, some good Samaritans rescued a stranded couple.

Carlos Hernandez, twenty-one-years old, and his girlfriend Maria Herman-Kitami, eighteen years old, didn’t expect to get snowed in at Alder Springs. Alder Springs is a subsection of the Mendocino National Forest that usually doesn’t have a lot of snow.

The couple left for the camp ground on Monday and were supposed to return on Friday. On Saturday morning when the couple didn’t return, their family reported them missing.

Unfortunately, a blizzard had hit the grounds the weekend before they had arrived and continued through the week. The conditions were worrisome.

It took multiple search crews to scour through the hazardous conditions.

After a lot of searching, the team had found the couple. As it turns out, their Jeep was encased in snow. But the pair was quite resourceful. The couple stayed in the Jeep, wrapped in sleeping bags, to keep warm. Also, there was a sign on a nearby tree alerting anyone who came to look for them.

Those who saved the couple were relieved that they found them when they did. Jason Logan was one of the members of the search party who found the Jeep. He thought that if Kitami and Hernandez were there any longer, the Jeep would have been completely buried. It is unsure if the couple would have survived the storm for even a night longer.

Currently, the two are in good spirits and are safe in their homes in San Francisco.