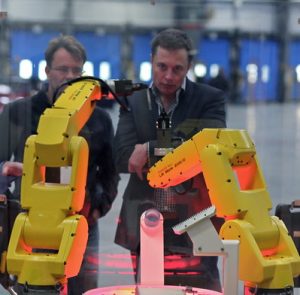 Elon Musk has had quite a crazy couple of weeks. For starters, he just gave birth to a child with Grimes. Now I, for one, welcome our new alien overlord, but that isn’t the only thing going on with Musk currently.

Since his new child was born, Elon Musk has been making moves in order to reopen the Tesla facility. Unfortunately, this has been met with backlash from Fremont county.

Throughout the past week, Musk has been on fire through his Twitter account. Demanding the county to allow Tesla to reopen the facility and continue to produce cars and keep its workers on the payroll.

On Monday, photos shown the plant in full swing. Its employee parking lot full. The response from the area is that they must meet the appropriate safety procedures in order to continue operations. Musks response was simple: They can just move to New Mexico or Texas.

Tesla Opts To Sue For Reopening

While the COVID-19 lock down has been in effect, Musk has been fighting to stay open. Currently, his company has been under the knife with many other auto manufacturers being able to continue operations.

Where other companies have a workers union to back them up, Tesla does not have that. The company is self-owned and operated. This hasn’t stopped them from taking direct action against the districts government.

County officials have warned that if the company proceeds to function without the proper safety precautions, then Musk has the potential to face a $1,000 dollar fine per day or upwards of 90 days in jail.

This has not stopped the futurist from continuing operations. The state gave Tesla till Monday (yesterday) at 5pm to come up with a list of safe regulations that would allow them to continue to operate. Unfortunately, Tesla has not complied with the initial response.