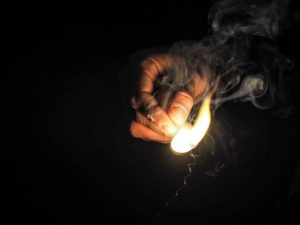 SAN FRANCISCO, CA – During a riot in San Francisco’s Mission District last month, a man threw a firebomb at a San Francisco police officer. Consequently, the officer was injured in the process. As a result, the 30-year-old man was arrested.

According to authorities, suspect Nilman-Vincent Vanewyk had been arrested several times before. Previous charges include assault with a deadly weapon upon a peace officer. As well as knowingly exploding or igniting a destructive device. And, unlawful possession of an explosive.

Furthermore, as reported by investigators, officers from the Mission Station were patrolling the 22nd and Bartlett Streets area on October 22. Around 10:51 p.m., they saw a man in the middle of the street igniting an illegal firework.

Therefore, the officers got out of their vehicle and arrested the man. However, as they were doing so, two large crowds began throwing glass bottles at them. Next, an inflammable device was tossed from the crowd and landed less than one foot away from the officers. Then, it exploded into flames. Thus, the officer was transported to a nearby hospital where he was treated for non-life-threatening injuries.

Apart from this, authorities obtained video footage of the incident and were able to pick out the suspect. Following the surveillance, on Friday, November 8, an officer, off-duty saw the suspect in the 1600 block of Post Street. He then radioed on-duty officers who arrived and arrested Vanewyk on the spot.

Although an arrest has been made, San Francisco police are still investigating the matter. However, anyone with information is encouraged to call the SFPD 24-hour tip line at 1-415-575-4444. Or, text TIP411 beginning the message with SFPD. It should be noted that you may refrain from revealing your identity as well.