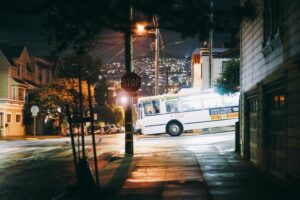 The incident began at around 8 p.m. At the intersection of Mission Street and Cortland Avenue, Rickey Dancy assaulted the driver of an empty bus. Dancy then began heading north, swerving dangerously across multiple lanes of traffic for more than a mile. He hit around ten other vehicles along the way and eventually came to a stop at 19th and Guerrero Streets.

An ambulance at the scene treated the injured driver and one other person for injuries. However, neither wound up needing further medical care. Other officials blocked off the intersection for a while to clean things up. By early Saturday morning, the Mission District was back to normal.

San Francisco police arrested Dancy at the scene and are holding him without bond. He faces as many as 17 charges for the incident. Police say that he was under the influence during the spree, so all of his charges include drug charges as well as the usual ones. Those include felony carjacking and assault with a deadly weapon. Of course, he will also be charged with multiple counts of hit-and-run driving, as he caused damage to around ten other vehicles.

Luckily for Dancy, no other people were on the bus at the time of the hijacking. If they had been, then he could have been charged with multiple counts of kidnapping, which would add many years to a potential sentence. As things stand, Dancy will most likely be in prison for a while. However, it could have been a lot worse for him.

So far, police have no motive for the spree.