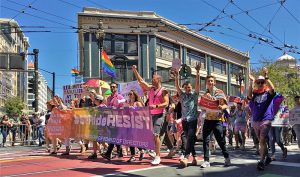 In San Francisco, transgendered people will soon have a neighborhood to call their own. According to new reports, a “transgender district” is coming to town.

This comes after a time of opposition toward the transgender community throughout the country. Jane Kim, an SF supervisor representing part of the city’s Tenderloin district, spoke about the project.

She said: “The first transgender commemorative neighborhood in the nation’s history is well timed given the president’s attack on transgender people.” She spoke in favor of the creation of the district since 2017. Now, it seems it will come to fruition.

The new transgender district will also give assistance to transgendered individuals. How? In helping start businesses and offering job training to LGBTQ residents. Kim also stated: “We will have grants for small businesses and we need to be intentional to make the district an anti-displacement strategy.”

But, how will the district work? Taxpayer money – they have already received $215,000 from the city. This information comes from Clair Farley. She is the director of San Francisco’s Office of Transgender Initiatives. As a result of the November vote, this tax money comes to the district. Arts organizations are set to receive $3 million funneled into cultural districts.

The name of this new district? According to The Daily Beast, they gave the district the name “Compton’s Transgender Cultural District.” Back in 1966, a dispute between police transgendered individuals and police occurred at a diner with the same name.

Essentially, things are changing in San Francisco… building of the community center for the district may begin in the near future.