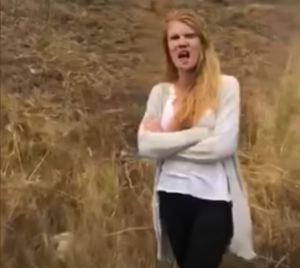 When it comes to the West Coast, some may say that it is a relatively progressive place to live. As opposed to some other parts of the country, this area seems to have a significantly larger acceptance of minority communities. Unfortunately, even with the efforts of citizens, some feel that it is still a useful insult. On the other side, it exposes them as what they appear to be, hateful.

In this video, we see a typical confrontation as to what has been happening. The lady states that the man is vandalizing stating that she knows the residents of the building and that he is committing vandalism.The plot-twist is that the man who is painting on the wall owns the property.

Another video showcases a popular Tech CEO going off on a racist tangent against an Asian couple at a restaurant.

The latest showcases a young woman shouting at a Latino man as he walked his dog.

The unfortunate side of American history has a heavy hand in intolerance. From slavery to the acts that have followed, it appears that even in progressive neighborhoods, these thoughts are still prominent.

Rants Are Popping Up All Over San Francisco Social Media

The bay area, especially – has a reputation for its progressive leanings. With videos emerging online, its showcasing that even in these areas of forward-thinking movements, backward-thinking can still exist.

The issues that we see today are the same as we saw them in the past. While many still want to believe that these issues are no longer a part of America, the presence of videos has shown that there is still a lot of work to be done to continue the positive embrace of equality in the United States.