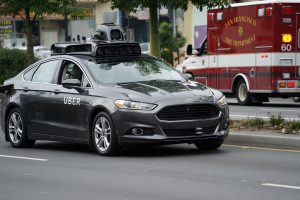 Beginning Tuesday, a pair of Volvo XC90s outfitted with Uber’s self-driving system roam around the city’s west side. For now, they remain restricted to the Richmond District, an area with fewer pedestrians.

However, despite their technology, backup drivers monitor the vehicles as they operate in self-drive mode. That requirement carries over from the previous bout of testing. Despite the precaution, one of the cars still managed to strike and kill a pedestrian on March 18 of 2018.

Prior to the fatal crash, a pair of incidents yielded concern and outrage from the public and government officials. In one, taxi dashcam footage caught one of their self-driving cars running a red light in San Francisco. Subsequent probing revealed the traffic light violation was the fault of Uber’s software.

In another, a Volvo SUV with self-driving tech got into a crash, tipping the vehicle onto its side.

Then, in March of 2018, one of their self-driving cars failed to recognize a pedestrian crossing a street in Tempe, Arizona. The backup driver watched a television clip on their phone as the car slammed into 48-year-old Elaine Herzberg, killing her.

Though, later that same year, they returned to testing in Pittsburg with authorization from Pennsylvania’s Department of Transportation.

Now, with an official permit from the California Department of Motor Vehicles, Uber returns to testing in their home city, albeit considerably more limited. In addition to Pittsburg and San Francisco, Uber presently tests in Dallas and Washington DC.