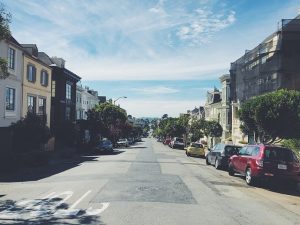 With social distancing protocols mandated by state order, pedestrians seek space when traveling to and from home. With traffic thinned throughout San Francisco, officials found a way to assist those on foot maintain distance. The Slow Streets initiative, modeled after Oakland’s measure, implements street closures to prioritize foot traffic, allowing pedestrians to walk safely in the street.

The idea is to provide more room for those walking between errands. The Center for Disease Control and Prevention recommends keeping a six foot radius around you free of others. However, maintaining that proves difficult on tight sidewalks. Though, with the ability to walk in the street, pedestrians gain excess room in which to maneuver around one another.

“The purpose of Slow Streets is to manage traffic speeds and create a safe network for essential walk and bike travel while transit service levels are reduced,” said a spokesperson for the San Francisco Municipal Transportation Agency.

Cones and signage mark off the specific streets. However, residents of these blocks are still permitted to drive through them, as well as delivery vehicles, albeit at a reduced speed.

While the initial rollout incorporates a select few neighborhoods, the SFMTA plans to expand. Presently, neighborhoods such as Marina, Potrero Hill, and Visitacion Valley, among others, feature no slow streets. An expansion could include additions to these neighborhoods.

However, the first phase excluded input from certain local officials who now criticize the placement of the first slow streets. Supervisor Matt Haney, who represents Tenderloin, took to Twitter to vocalize his disagreement.

However, one San Francisco neighborhood might reject street closures. The co-chair of Chinatown’s Transportation Research and Improvement Project Queena Chen believes street closures clash with present movement in the neighborhood. “Chinatown has been doing so well with sheltering in place, and so many nonprofits need cars to make sure people are getting food. All these little things need to be done in cars. That’s why we feel streets in Chinatown shouldn’t be closed,” she said.

After feedback from local officials, the next phase of Slow Streets may come with more collaboration.