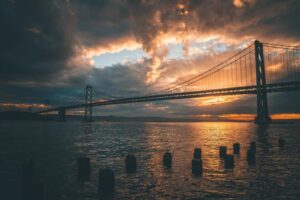 The latest round of the record-breaking storms that have bombarded California for weeks claimed an unsuspecting victim. On Saturday, the Golden Gate Bridge experienced a period of extremely strong winds. In fact, they were so strong that they toppled a semi truck on the bridge.

The truck fell over at around 6:30 p.m. CHP responded as quickly as they could, trying their best to direct traffic around the truck. However, it quickly became apparent that officials would need to close the whole bridge in order to return the semi to its wheels.

It took them around an hour to get the truck upright again. By 8:15, the bridge was open once again, although there was still a massive traffic jam.

The last few weeks have been difficult for California. A series of storms have dumped rain on the state, especially in northern California. While the storms will end soon, possibly by Tuesday, the damage they have caused will take a while to recover from.

The storms began before the new year. As the rest of the country struggled through a massive cold snap that dumped snow everywhere, California missed the worst of it. However, the storms in the Golden State have continued, dumping gallons of rain on a state that isn’t well-equipped to handle it.

In Northern California, many areas are now under evacuation orders. San Mateo County’s Highway 92 had to be closed due to a massive sinkhole. This comes as people attempt to leave an area that could be impacted by mudslides and, in some cases, already has been.

19 people have already died due to the California storms. With the state still experiencing power outages and floods, that death toll could rise. We’ll have to wait and see, but we hope that, with the storms finally letting up, California won’t see any more deaths due to these record storms.