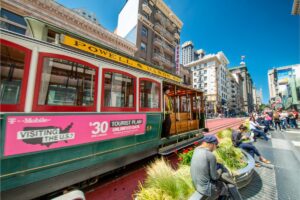 Students around the Bay Area may soon be in for a treat. A new program will be launched that will hand out 50,000 BayPasses that offer unlimited rides on every public transit company in the Bay Area. This includes Caltrain’s Commuter Rail, Muni Buses in San Francisco, BART, and even ferries. Students who are eligible for the pass are students from UC Berkley, San Jose State, San Francisco State University, and Santa Rosa Junior College. Unfortunately, there are approximately 142,000 students enrolled, which means that only about 25% of students will get a pass. This is only a pilot program, and it is the hope that more such programs will come in the future.

The reason for the BayPass pilot program is that the public transportation system is failing the community. The Metropolitan Transportation Commission (MTC) oversees the dozens of transit companies in the Bay Area. With so many different companies with different jurisdictions, it’s hard for riders to navigate the public transit system. The MTC wants to create a single transit mapping system throughout the entire Bay. The hope is that this pilot program will give them a better idea of how people utilize the transit system as a whole. As of late, the public transit system has become a maze. It’s hard to figure out how riders navigate the system since there are so many companies that keep their own records. There are no current passes that overlap between these companies. The BayPass will be the first of its kind that will work on multiple companies’ lines.

The MTC Wants to Fix the Bay Area’s Public Transit

The pilot program will cost the city $4.5 million from the funding of the MTC. They will reimburse the fair for each rider for the 2 years the program will run. Unfortunately, not all students will have access to the pass. However, all students at Santa Rosa Junior College will have access to the pass. Students at the other colleges will get access through a lottery system. It’s up to the student to enroll in the lottery.

The hope is that after the 2 years this program runs, the MTC will have enough data to figure out what the issue is with public transit in the Bay area. Currently, there are more riders and options in car-friendly Los Angeles than in San Francisco. It’s a big disparity as San Francisco’s public transit was once the lifeforce of the city. MTC wants to revitalize the Bay Area’s public transit to its former glory.