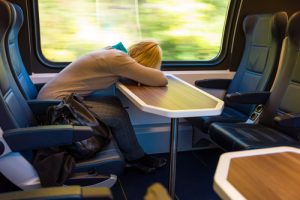 For almost a year, 30-year old Finlay has been commuting for 4 hours, and 140 miles to the San Francisco Bay Area from the rural town of Dixon, so he doesn’t have to pay $4500-a-month San Francisco rent.

Danny Finlay wakes up at 4.30 a.m. when it’s still cold and dark to go for a two-hour, 72-mile commute ahead of him. And that’s just the first half of his journey.

Danny had the experience of commuting two hours to get to the work previously. Now he has to go even further to get to his new job. Danny Finlay works as an account executive at public-relations firm Sutherland Gold located in San Francisco.

Luckily, by the time he gets into his car, it’s early 5.10, so there is not a lot of congestion that early. But as soon as he drives for a while, traffic will start to occur, because you get into more populated towns as you get closer to the Bay, said Danny.

Driving a lost distance must be tiring, right? What Finlay does is driving about 20 minutes from Dixon to a town called Fairfield, then take a bus for 45 minutes all the way to El Cerrito. And that’s not it yet.

He has to take a 45-minute train ride into the city and walks another 10 minutes to his office.

Just imagine commuting about 1000 hours per year, or about 43 full days on the road.

There are plenty of job opportunities, specifically in the career field that I wanted to get into. But the cost of living can make it hard for people to call it home. The median rent in the city is $4500.